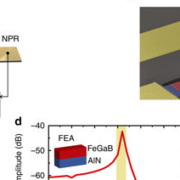 We’ve recently been working on optimising an Near Field Communications (NFC) card reader antenna using our skills in wireless integration and antenna design. The customer had an existing system and a new requirement to mount the read antenna at the end of a cable away from the NFC reader mainboard.

This involved us working on the original system by modifying the existing antenna to the required inductance, implementing and tuning an impedance matching network and trialling different cable types. Remember, the rules for tuning the read antenna are different to those for the receive antenna.

Despite the design challenges we were able to achieve a card read distance up to 30mm away from the antenna and provide a robust solution for mounting on different surface materials. The customer was happy and we look forward to seeing the product out in the field!