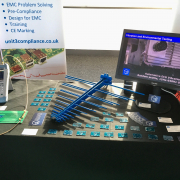 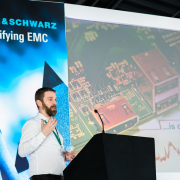 A fantastic day at the Rohde and Schwarz Demystifying EMC 2019 show down at Silverstone. It provided a chance to reconnect with some familiar faces and meet a whole load of new ones. R&S always put on a good event with varied content and lots of interest.

I was presenting a talk entitled “From Design To Pre-Compliance: Pitfalls and Pro Tips” which received lots of positive feedback from the attendees. The weather was glorious with bullet blue skies and The Wing venue in the centre of the circuit makes for a great location. The Unit 3 Compliance stand was very popular throughout the day with a queue of people stopping by to say hello and talk about pre-compliance testing. The Pocket EMC Debug Probes flew off the table too. 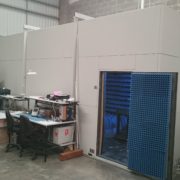 It has been a very busy few months at Unit 3 Compliance; it feels like the chamber turntable hasn’t stopped spinning. There has been a wide range of products through the door from prosthetics to video wall controllers, from high spec IoT products to motion sensors, from lighting power supplies to RF amplifiers. I really love the variety of work!

I’ve also had some safety assessment work to carry out on which is always interesting. Disassembling mains transformers to measure the creepage distances inside is fascinating, getting out the angle grinder to hack the laminations apart just adds to the fun.

There have also been a fair amount of design reviews and general consulting work in between. To be able to work with customers right at the start of the project is invaluable as it sets them on the right path without having to find problems further down the line.

I’ve found lots of interesting nuggets of EMC information during this process that I’m looking forward to sharing with you in some future blog posts once I get time to sit down and write them up.

I managed to escape down to Lincoln to speak at the Open Source Hardware User Group oshcamp18 meetup on the subject of EMC testing. The delegates came up with lots of good questions at the end and the audience participation (see below slide) of the talk went down well. Higher! Lower! Good to see reconnect with some old contacts and make some new ones. The other talks were very interesting also, lots of good work going on in the open source hardware field at the moment.

Lastly, and it snuck past without me spotting it, Unit 3 Compliance had it’s first birthday. It’s been a whole year since I got the keys to the unit. In that time, and with lots of help, it has gone from this: Here’s to the next 20 years of compliance, I hope to see you on the way. 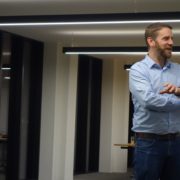 I had the pleasure of speaking at the local IoT Leeds meetup, held at the newly (and finally) renovated “Platform” venue just outside of the train station. The views over Leeds city centre from our 10th floor suite where the event was being held were impressive. Paul Wealls of Mokanix had the first slot and gave an interesting talk on their development toolkit for mobile applications. I’m not a software engineer (my code makes grown men weep) but the usefulness of this cross network toolkit was evident and seemed to generate a lot of interest among the attendees. Well worth checking out if that’s your bag.

The synopsis of my presentation, titled “EMC for IoT” was a very high level overview of the European EMC and Radio Regulations for IoT hardware, CE marking, and the importance of spectrum protection through compliance. Because I didn’t know the makeup of the audience beforehand it was tricky to know exactly what sort of content to put in. I opted for more graphics than words which gives more flexibility in the subjects covered. In the end, in the audience of around twenty people, there were two (and a half) hardware engineers, mostly software engineers but everyone had a technical background. As such I skewed the presentation towards the general but still went into detail where necessary. I really enjoy speaking on EMC matters and it’s great fun to share knowledge with like-minded interested professionals.

The questions received after the presentation were all very intelligent and well thought out. They ranged from instances of counterfeit components causing EMC problems, understanding risk, the costs involved and the use of mobile devices on aircraft. Despite what can be seen as a dry subject the feedback from the presentation was very good. It was also great to see my ex colleague Chris who I hadn’t seen for a long time and catch up with him. We both headed to the Leeds Brewery Tap for a pint of Midnight Bell with Will (organiser) and Neil and for a chat that ranged from the local job market to AI before hopping on the train home. All in all, a good evening!

I’m looking to take the talk out on the road for other meetups or organisations so if you know anyone running an technical event where this would fit in then I’d be interested to hear about it.