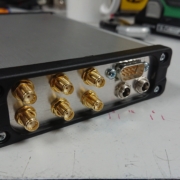 For Equipment Under Test (EUT) monitoring during EMC tests we’ve adapted a Digilent Analog Discovery 2, added an input filter board, and enclosed in a nice case from Lincoln Binns. This connects to the (rapidly evolving) Monitor-o-Matic 8000 software mentioned in a previous post.

This adaptor and software is going to be used this week during testing of a piece of industrial equipment. This test adaptor will be monitoring both 4-20mA and relay outputs (using the in built power supplies to generate the voltage on one pin of the relay contacts and the digital inputs to monitor the other pin).

The AD2 is a very versatile piece of kit with a good balance of analogue and digital input and output for a reasonable price. It includes

We’re going to be monitoring how well this device performs for monitoring during testing. We may need to add extra filtering beyond that already fitted such as optical isolation for the digital inputs.

We may also look at fitting a battery and a USB to fibre optic converter for fully isolated measurements in a variety of EMC environments. 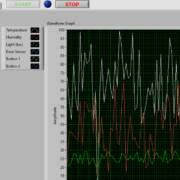 Concentrating on a display of figures scrolling past looking for small deviations in one or two characters sounds easy, but try doing it for a couple of hours straight whilst doing Radiated RF Immunity testing and you will be fighting an itch to defocus, stare off into the distance or check the news on your phone.

Not ideal when you only have a short (think a few seconds) window to catch potential problems or if you have multiple screens to monitor.

To remedy this and improve the quality of our testing we’ve written a simple application in LabView to handle logging and display of data captured from the EUT during testing. 2) Format could be human readable text, comma delimited, JSON, XML… whatever gets the job done for you. So long as the values are extractable from the text using regular expressions we can log and plot the data.

3) These can either be output as a continuous stream of data that the MoM8000 software will parse, or the EUT could require separate commands to read each parameter. If you can send us an example serial output ahead of time we can get the software setup before your arrival so that no testing time is wasted during setup.

4) We also need to know what performance limits you might have (e.g. temperature deviation of +/- 0.5C) so that we can enter the appropriate limits. This notification is key as it lets us quickly evaluate EUT performance to the Immunity Criteria (A/B/C) in the appropriate standard.

We’ll be adding extra functionality to this software over time when we develop new requirements. This includes:

Discuss with us in advance if you have a special requirement for testing and we will do our best to accommodate you. 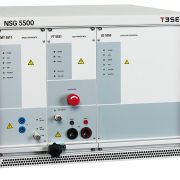 We are continuing to invest in our test capabilities. As such, the Unit 3 Compliance EMC test laboratory has just acquired a Schaffner (Teseq) NSG 5500 automotive surge/EFT test generator. With this, we now have the capability to test your equipment to the ISO 7637-2 standard for automotive conducted transients.

This gives us the capability to support your automotive product development to these standards:

Timing is a curious thing. Like two buses arriving simultaneously after a long wait I find things tend to cluster up. This acquisition occurred not long after publishing this blog post on how to test to the automotive standards without an automotive surge generator. 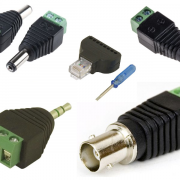 Working in an EMC test lab means I get to see all kinds of equipment. No two devices are ever the same so I have to make up / adapt cables to interface various devices. If you work with a wide range of products or just want a bit more versatility in your lab then read on.

I have no affiliation to any of these products, I just use them a lot.

These versatile little test adapters from Clever Little Boxes are great for being able to quickly hook up one thing to another. As you can see they come in all shapes and sizes. I’ve got a box full of various ones, including the ones shown in the above photo. The ubiquitous 4mm “banana” plug and socket is super common on power supplies and other kinds of test equipment. They give a surprisingly low resistance connection for their size which, along with their simplicity, goes a long way to explaining their popularity.

If you’ve ever made up a cable assembly with standard connectors then you know they can be a pain. That’s why I really like these connectors that have a spring loaded gate that accepts a bare wire up to 2.5mm^2. I’ve just got the standard red and black colours to keep things simple. These work well when paired with a set of crocodile clips

Get Me a Crocodile Sandwich…

I really like to pair these crocodile clips with the 4mm connectors above for super versatile connections to anything big like metal frames or enclosures of equipment. Big numb adapters get a bit crowded when trying to connect onto individual connector pins or component legs. That’s where these teeny spring clips come in. I’ve often ended up with one of my development boards looking like an electronic porcupine with these stuck all over them! Something More Permanent for Sir?

If I’m wiring up anything using mains voltages that I want to be a bit more permanent and safe then my go to are these spring terminal blocks from Wago. They are like choc block terminal strips with the main exception that these are not rubbish. Rated at 32A they can accept much larger wires that you would think and the spring clips retain the wires with a remorseless grip. They come in multiple ways although I tend to use 2, 3 and 5 by default. Best of all they are ridiculously cheap. Just don’t get your thumbnail caught underneath the orange lever when it clicks down otherwise you’ll be using some language that is distinctly NSFW.

So “be prepared” (Scout motto) and happy testing.

p.s. don’t get me started on the adaptor vs adapter debate. 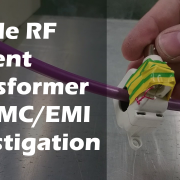 This post contains some background info related to the video I posted on YouTube on how to make a simple RF current transformer, a great tool for debugging EMC / EMI issues such as radiated emissions from cables, or tracing conducted RF immunity noise paths. They also cost a few hundred £$€ each which, if you are on a budget like most people, represents a significant investment for a individual or small laboratory. However, this one can be built very cheaply; most labs will have a development kit with some clip on ferrite cores, if not the core I used only costs £5 from RS.

I’m a big fan of making my own test adaptors and equipment as its a great way to really understand how things work and the compromises in any design. As such I decided to share how I go about making this kind of really useful tool.

It is to be stressed that my version is a crude but effective piece of equipment and does not replace a well designed commercial product. There’s a time and a place to invest in quality equipment and one should use engineering judgement on when that is. For instance, measuring the RF current accurately is definitely a job for a properly designed and characterised device.

If you want to explore RF current transformers in more detail then there is plenty of info on Google, but these links are useful places to start.

Some of the design compromises involved in this low cost approach include:

The ferrite material in these cores is specifically designed to be lossy at the frequencies of interest, which will result in a lower reading than a higher bandwidth core and a reduction in the amount of noise on the cable downstream from the noise source. This can in some cases mask the effect you are trying to measure. The commercially available products use low loss, high bandwidth ferrite cores.

A high insertion loss also makes these parts more unsuitable for injecting noise into circuits for immunity testing. they can be calibrated for this task using a simple test setup (to be covered later)

Number of secondary turns controls sensitivity but the more you add, the inter-winding capacitance increases, decreasing the bandwidth of the tool. I generally use 5 or 6 turns to start with but I do have a 20 turn part made with micro coax on a solid core which also helps to deal with…

From the cable under test to the secondary winding. Normally a split shield (so that it doesn’t appear as a shorted turn) is built in to commercial products. Guess what, that’s easy to do on this with a spot of copper tape or foil.

Although a well designed product, the plastic hinges and clips on the cores are not designed for repeated opening and closing. The Wurth Elektronik system of a special key to open and close the core is much more robust at the expense of having to keep a few keys to hand for when they inevitably go missing. However these parts are so cheap and quick to make that a broken clip on core is no real obstacle.

I’ll be following this video with some hints and tips on how to use these devices effectively for finding radiated emissions problems and for looking at conducted RF immunity issues. Stay tuned.

The sharp eyed of you will have spotted that I originally assembled the BNC connector on the core so that it covered the key-way to open the clamp. I rectified this but didn’t film the change.

Also, you can wrap the wire round the core without removing it from the housing but that means you don’t have a nice flat surface to affix the BNC connector to. It does make it easier to close the clamp however so make your choice.